Menus from two different restaurants cannot be consumed on the same table.

No rooms are available for the selected date, otherwise you may have entered less than 2 customers (i.e. 2 adults or 1 adult and 1 child up to 90cm). Please modify your search criteria or contact us on +39 029090169.

The park will be closed for one or more days during the selected period, so you can enjoy just one day of fun. If you prefer to come to the park for 2 consecutive days, change your arrival date; otherwise, continue to the next step.

The park will be closed for one or more days after your arrival in hotel, so you can enjoy one day of fun. If you prefer to come to the park for two days or more, please increase the number of nights.

The number of facilities you have selected is lower than the number of guests. If all guests will use them, the hotel will ask you an additional charge

CLICK HERE TO FILL OUT THE FORM, OR CLICK ON THE ICON BELOW TO CHAT WITH US.

It's Leolandia the Records park!

Waiting for another great Record, here there is a really good recognition! 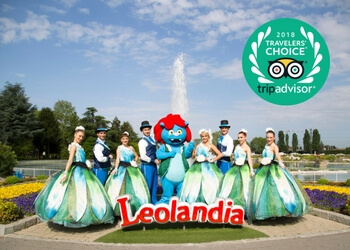 It's TripAdvisor's Traveller's Choice 2018 chart to confirm Leolandia, for the second consecutive year, as the most beloved park in Italy!

Who defines Leolandia as "The cartoon country", who instead is much more concise and incisive "Everything Super!" And who, with eyes still full of magic, defines the park "The dream for children!". Leolandia, under many aspects, is an enchanted place where even the adults become again little kids for one day!

There are also numerous appreciations on the overwhelming presence of PJ Masks, 2017 novelty and reconfirmation of upcoming seasons, on dynamic Ladybug and Cat Noir, the protagonists of Miraculous and last arrived in the great "LeoFamily" and finally, on the new area opening in August dedicated totally to the two Russian favorites: "The Forest of Masha and the Bear"

Waiting for July 28TH, where another great goal from Record could be reached by Leolandia, the first most loved park in Italy in the TripAdvisor ranking awaits you for a amazing summer with lots of attractions for the whole family!